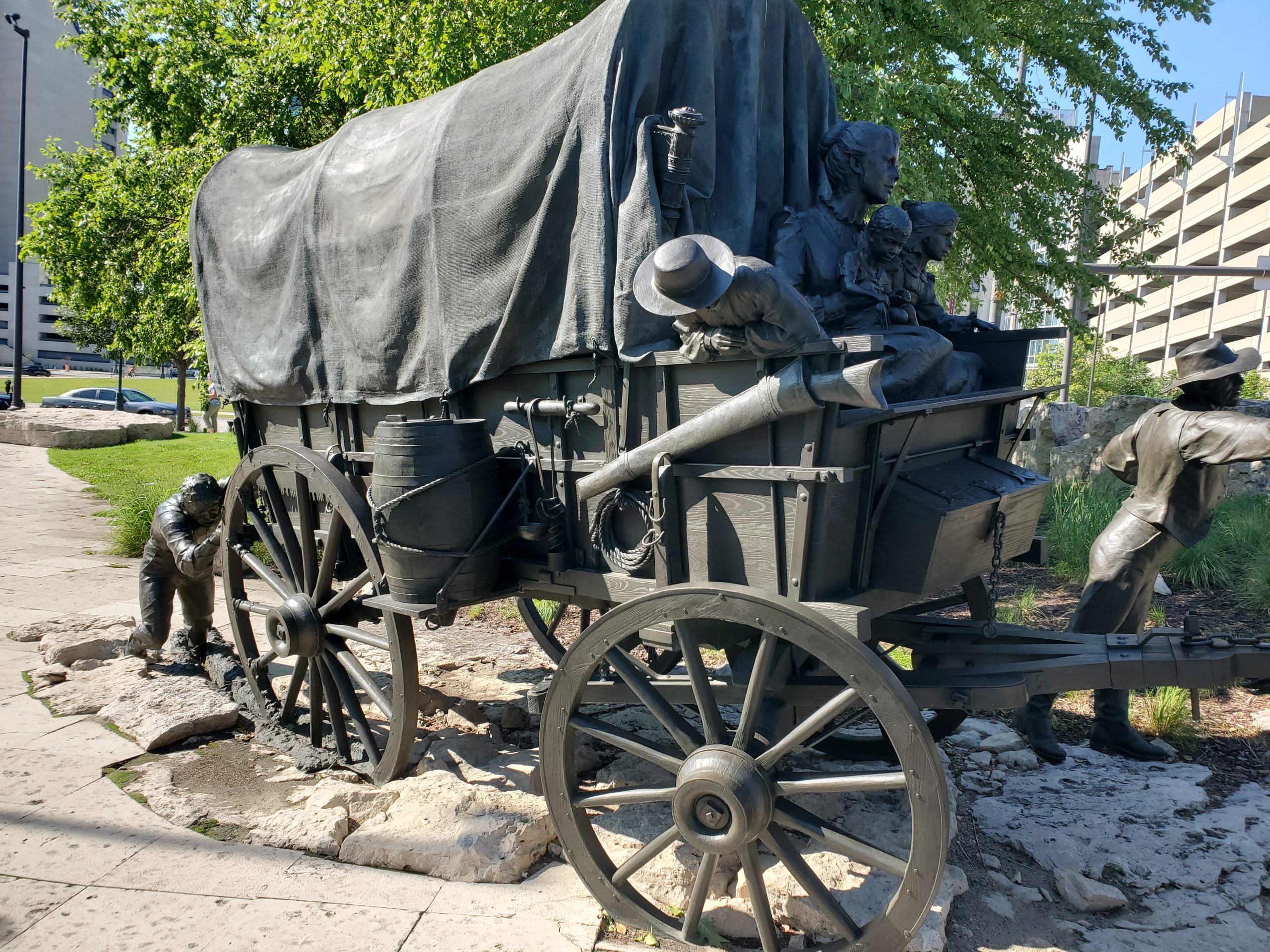 Every July 24, the State of Utah celebrates Pioneer Day, a major state holiday.  Pioneer Day commemorates July 24, 1847, when an early contingent of Mormon pioneers, led by Brigham Young, entered what is now the Salt Lake Valley.  They had made a long trek to find a place of refuge from religious persecution. The holiday is marked in many Utah cities and towns by a parade with pioneer-themed floats.

On a recent road trip through the West, we saw some key points along the trail that led to the settlement in Utah. The first was Winter Quarters (current day Omaha), the embarkation point where the Mormon pioneers spent two winters preparing for the trek west.  Downtown Omaha has an extensive monument to the Mormon and other pioneers that went west in wagons, on horses, or on foot pulling handcarts.  There is also a cemetery where 600 of the 4,000 Mormon pioneers who spent those difficult winters are buried – they didn’t make it west.  Overlooking the cemetery is a powerful bronze sculpture commemorating the sacrifices and faith of those pioneers – by sculptor Avard Fairbanks, who coincidentally sculpted the busts of George Washington that frame the campus of George Washington University.  The sculpture is placed directly over the graves of an unknown child and seven other pioneers.

About 450 miles to the west is Chimney Rock in the North Platte River Valley.  Not only is it the most recognizable landmark on the Mormon Trail (and the Oregon Trail that parallels it) because of its unique shape, it also marks the end of the flat part of the trail and the beginning of the mountainous terrain that culminates in the Rocky Mountains.  Near Chimney Rock is a grave marker for Rebecca Winters, a mother of 4 who died from cholera along the trail.  It was very moving to see that a family friend had taken the effort to carve her name in an old wagon wheel to memorialize her sacrifice and her importance as an individual.  Her descendants later added a more traditional grave marker.

The Mormon Trail is sacred ground for members of our church, the Church of Jesus Christ of Latter-day Saints.  Both of us have ancestors who were among the 70,000 that went west, through great hardship, to find a place of peace to live and worship.  What motivated these pioneers to make this dangerous trek?  As one of our church leaders summarized a few years ago:

“The foremost quality of our pioneers was faith.  With faith in God, they did what every pioneer does – they stepped forward into the unknown: a new religion, a new land, a new way of doing things . . . Two companion qualities evident in the lives of our pioneers, early and modern are unselfishness and sacrifice.”