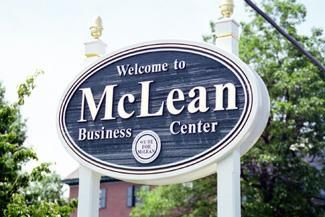 In terms of population, the “hundred pound gorilla” in the Tysons area is the McLean Census District, home to 50,000 people according to the latest numbers, about twice that of the next largest district, Tysons. Like Vienna, Wolf Trap, and Great Falls, McLean is older and “whiter” than most of the area, three out of every four households identifying as white. Median house values and incomes are a bit lower than in Great Falls, but higher than in Vienna or Wolf Trap. The percentage of foreign-born persons is about the same in these areas, around 24 percent.

A founding member of my church used to live in central McLean when he first moved into the area in the 1950s. He rented a wood-frame house next to the Old Fire House and told me that what is now the parking lot of the Giant Food Store used to be a field of beautiful wildflowers tended by his landlord.

Many other changes have occurred over the years. St. Johns Episcopal Church, for example, used to be downtown but moved to its current site on Georgetown Pike long before Langley became a suburb. I once carpooled with a colleague whose family broke the Catholic “bans” on Kirby Road; he told me that in the late 1950s Langley was nothing but farmland and he used to ride his bicycle up Lemon Road to swim in a quarry in Pimmit Hills! More recently, the McLean Islamic Center (MIC) moved from an office building in central McLean to its current location right on the edge of Tysons west, off Route 7.

My neighborhood near McLean High School was developed in 1959 but is changing as the old houses are knocked down and replaced by much larger units. Still, it retains a lot of history, like the old McLean Fire House, which is now a youth center. You can see photos of old McLean at the Dolley Madison Library or at my barbershop on Chain Bridge Road or at these neat websites: research.fairfaxcounty.gov/local-history/mclean-history-portal and www.oldmclean.com/index.html.

Chain Bridge was built before the Civil War and was crossed by the Union troops as they twice crossed the Potomac to meet their doom at Bull Run (Manassas).

McLean has many different neighborhoods that sport an interesting variety of street names I enjoy reading as I cycle through the back roads. All the streets in McLean Hamlet, which borders Tysons on the south side of Lewinsville Road, have references to Shakespeare, my favorite being Agin Court! On the northwest side of McLean across Dolley Madison in the Churchill Road area, there are names like Dead Run, Capitol View (I doubt they can really see the Rotunda), and apropos of Congress and not a few lobbyists who live in the area, Carpers Court. (I have hoped in vain but never found a Cavil Lane.)

And the district encompasses all of Langley and the Scotts Run Forest Preserve, including the CIA, and the entire extent of Balls Hill Road, which as it approaches the Potomac affords some excellent rolling hills for cyclists and is lined by some of the most luxurious properties in the district. Closer to my neighborhood, there is perhaps the most apt, yet politically incorrect street name, Wasp Lane. Just so you know, there’s also a Hornet Lane, so that’s what the developers were thinking when they came up with it.

Closer to my church at the corner of Brook Road and Lewinsville, the likes of Washington Capitals superstar Alexander Ovechkin have taken up residence, right beside a home built by the former congregant of my church mentioned above. His home went through a second owner before it was purchased and expanded by a current member of my parish vestry. That said, many of the members of my church come from outlying areas like Reston, which the large McLean Census District nearly reaches, extending all the way down Route 7 to Difficult Run. You can find the map here: www.census.gov/quickfacts/fact/map/mcleancdpvirginia/PST045219