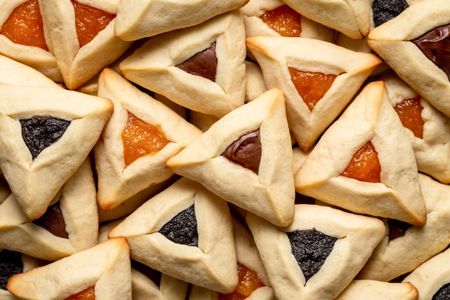 Next to Chanukah, Purim is probably the holiday to which Jewish children can most relate.  There are costumes, carnivals and Hamentaschen (preserve filled cookies in the shape of a triangle).  When the story is told, they get to make lots and lots of noise with groggers (twirling noise makers)  in hand. But surely there is more to the holiday than that.

In the Hebrew bible, in Kethuvim (the Writings), appears the Book of Esther or Megillat Esther.  In this short book, the story is related about a Persian king, who by historic timing might have been Xerxes I or Artaxerxes I.  His first wife has the audacity to disobey him and she is banished.  A call is put forth for a new wife and fair women from throughout the kingdom vie for this opportunity.  Among them is Esther, a Jew.  She wins the contest, but never reveals her background.

Concurrent with the wife plot is the plot of Haman who hates the Jews. Like generations before and after him, he couches his hatred by saying “There is a certain people, scattered and dispersed among the other peoples in all the provinces in your realm, whose laws are different from those of any other people and who do not obey the king’s laws; and it is not in Your Majesty’s interest to tolerate them”. (Esther 3:8).

Esther, from her position within, takes the risk of revealing her Jewishness to the king, and then exposes Haman’s plan to destroy her and her people. The king cancels Haman’s plans and Haman is executed.

Purim, like Chanukah, is traditionally viewed as a minor festival, but elevated to major holiday status as a result of the Jewish historical experience. Over the centuries, Haman became the embodiment of every antisemitic leader in every land where Jews were oppressed. The significance of Purim lies not so much in how it began, but in what it has become: a thankful and joyous affirmation of Jewish survival against all odds.